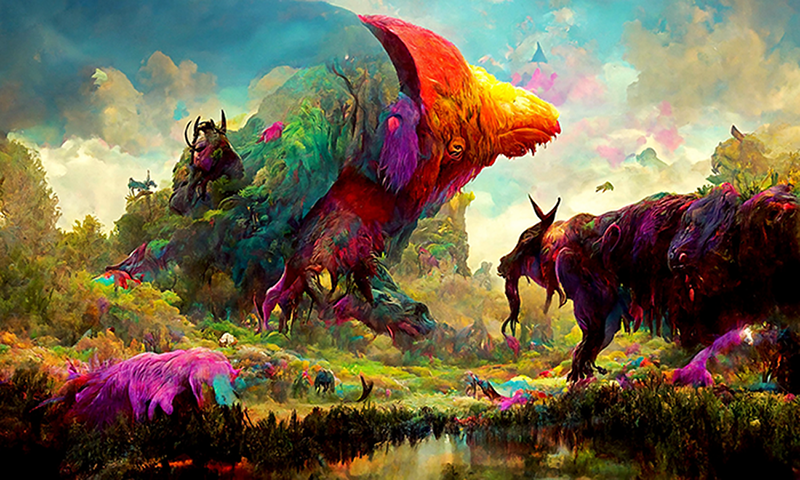 Welcome to the Summer, and another seven stories from authors both new and familiar to the pages of Mythaxis! This issue has pieces dark and light, with science fiction, fantasy, and horror all represented. But I always prefer to let the fictions we offer here speak for themselves—so, similar to my editorial of last Autumn, I’m going to take this opportunity to discuss some highlights of my genre reading in the first half of 2022.

I started the year with Piranesi, Susanna Clarke’s long-awaited follow-up to Jonathan Strange & Mr Norell, which was one of my favourite reads of 2021. I found this a strikingly visual experience, conjuring up a vividly unreal world of interconnected high-ceilinged rooms reminiscent of an ancient museum falling into decay, and into an ocean. It is principally occupied by a personality at first unaware of the strangeness he lives in, until hints of a wider context begin to invade his consciousness, and I was reminded of Iain Bank’s The Bridge (although it is more than twenty-five years since I read that, so to what extent they can truly be compared is maybe up for debate).

After Piranesi I dived into Lud-in-the-Mist by Hope Mirrlees—which I was actually nudged towards by comparisons with JS&MN—a quaint, charming, slightly insidious pastoral fantasy written in 1926. Set in a country bordering on the faerie realm, whose inhabitants have determinedly turned their backs on all that is irrational, an apparent black market in prohibited fairy fruit provokes a variety of challenges to the staid status quo of the capital city’s upper crust, escalating to traditional fae threats such as the spiriting away of tempted children. The focus is almost exclusively upon the ordinary humans folks, and I was particularly struck by how expectations about which characters are “good” or “bad” was subverted as the story progressed. It’s a really fun read.

Another novel I’ve had my eye on for a while finally had its chance: Naomi Alderman’s The Power, which I remember receiving all sorts of plaudits when it was published but somehow never got around to. It is an imagined historical novel, written in a distant future to describe a controversial theory of the past (roughly our present) in which women begin to manifest a potentially deadly electrical change at will, with the effect that global society is radically undermined and realigned towards a matriachy—a matriarchy still persisting thousands of years later in the world of “the author”, a man whose beliefs about his culture’s origins aren’t taken seriously, possibly because of his gonads. The obvious (and acknowledged) comparison is to Margaret Atwood’s The Handmaid’s Tale, and it’s similarly strong throughout, taking some chillingly dark and thought-provoking turns. Absolute power…

Next, Kim Stanley Robinson’s The Ministry for the Future, a utopian-leaning cli-fi novel which begins just a few years from now, as human-driven climate change wreaks a momentary disaster so shocking as to stir the world’s nations from their complacency and come together to finally act… or so you’d think. What actually happens is the creation of the titular well-intentioned but toothless UN organisation, to which wealthy nations pay mere lip-service, and which poor and suffering nations see as an irrelevance in the face of their doom, and the novel then spans decades as the Ministry gradually grows into significance and pushes for genuine solutions. More conventionally plot-focused chapters share page time with various other styles of text, including numerous unattributed monologues (occasionally by whimsical “speakers” such as a single carbon atom—not all of the book worked for me, tbh). It may re-tread elements of KSR’s previous climate-focused work, but overall it remains a very stimulating piece of “hard” sf, and obviously very relevant given the ongoing environmental crisis.

Finally, to wrap up the first half of my genre reading this year I’ll mention ten other books I’ve read (!), starting with a half-digression. I was slow to embrace the TV series of The Expanse when it first came out, but eventually I was thoroughly won over, and when the sixth (and likely final) season came to its end I decided I’d give a try to dual-author James S. A. Corey’s source material. In the following five months, I’ve now read all nine novels and the collected short stories and novellas, excepting only a single canon text, the short-short story The Last Flight of the Cassandra (which is not available outside of an RPG, apparently).

As you might guess, given that I persisted all the way, I liked the written versions of The Expanse as well. What I found interesting about the comparative experiences of reading and watching is two-fold. First, that the televised interpretation of the world of the story is, on a technical level, really impressive. There are some elements abandoned—the absence of black-goop-vomitting protomolecule zombies was a relief for me, there are enough literal zombie shows out there that this needn’t be another; and examples of the physiological changes caused by lives led in low- or zero-gravity only show up in the first couple of episodes, with Naomi Nagata in particular conspicuously not a foot or more taller than any of the other lead characters—but generally it offered a brilliantly realised science fictional world.

And narrative loyalty was the second thing that caught my interest. While there are also some deviations on this count, I was repeatedly delighted when reading and finding that some line of dialogue from the series had actually leapt from the page (including my favourite: “That really is how you go through life, isn’t it?”). The authors were involved in the production of the show, but that can often be as much a burden as a bonus when adapting material from one medium to another; no so here, with the books largely proving a blueprint that was followed remarkably closely. Reading the final tenth book, the collected shorter fiction, filled in a few gaps that I’d assumed were actual moments of originality in the TV show, but none of this is to take anything away from what the series achieved, and when it did go its own way, I have to say, it did so really well (the coalescence and development of Camina Drummer, for example).

Of course, the books carry the story further than the show did. My feeling regarding the latter three novels is that they aren’t as strong as what came before, even though I found the totality of the novels of The Expanse to deliver a really entertaining space opera. And as for how the show ended… well, I would happily watch more were it to continue, but even though the final series was rushed and crushed to fit into fewer episodes, I consider it far superior to any of the more high profile franchise rivals that have come to the small screen in recent years (naming no names, because who needs a flame war?).

I’ve gone on more than long enough, I think! Still, six more months of reading time ahead of me in 2022… I wonder what I’ll have under my belt come the Winter?