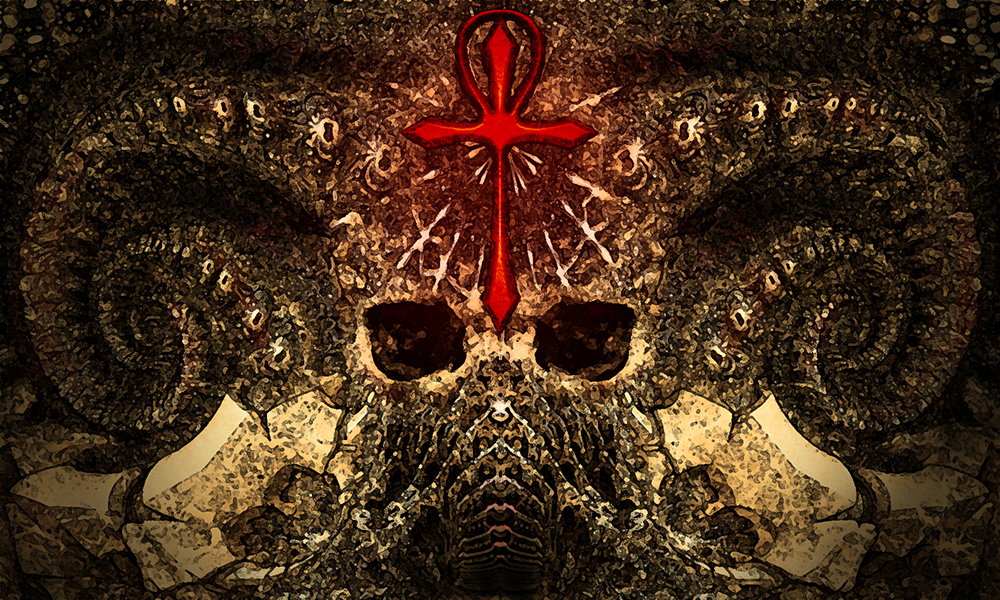 n olden days, the great wizard Jacob Bleek journeyed to Rome that he might sift among the wreckage of glory for secrets of furtive lore hidden since elder times. There he met the Blind Man Who Sees Much, who accosted him unbidden from his shadowed seat in the marketplace.

Leaning forward on his cane, the Blind Man said, “O Bleek, you I know for the cunning seeker after forbidden wisdom who dares all for all. Know, then, that hoary legend whispers of a concealed chamber beneath the ruins of the villa of Egabalus, and within that chamber, if it can be found—for many before you have tried and failed—lies the last resting place of the martyr Thoracrates, he whom the people call saint.

“With his body was laid his prized possession, a curious cross pre-dating Christ and, some will tell, even the Patriarchs. No mere trinket of old is this; rather, no less than the openly shunned and quietly desired Cross of Xenophor, which grants to its owner bountiful knowledge and powers beyond mortal ken. Do not you crave such a boon, Jacob Bleek? In your shoes, with your intact faculties, I would.”

Jacob Bleek thanked his mysterious informant and went forth to the site of the imperial villa, forgotten by the ages, now a sad heap of jumbled stones and nondescript mounds. He quizzed the folk in the vicinity, who were wont to dig holes there in the earth in fruitless hope of buried treasure, yet they knew not of any subterranean chamber, save by vague and useless report.

By cleverness, he inveigled his way into the pompous court of the Pope, whose collection of ancient relics and scrolls was renowned throughout the kingdoms, and there he did what previous adventurers had not thought to do: read the tattered documents of the strange old days, and learn from them the history of the hated Emperor Egabalus and his reviled pleasure villa; thus, in oddly indirect fashion, the story of the sad fate that befell Thoracrates. All this knowledge of yore pleased him mightily, for Bleek lived to learn, and in the doing he gathered into his hungry brain consequential details that put him on the track of the chamber’s location.

From the Vatican vaults he stole a plan of the villa, painted on parchment in a style unfamiliar to his times, yet legible to a determined scholar familiar with the scripts and arts of old. He traced on the scroll the corridors where once purple majesty reigned, matched those images to indications among the desolate heaps that mocked old glory. He noted the pictorial presentation of a peculiarly deep shaft, one offered without explanation, and he staked the spot in the despoiled soil under a sagging remnant of marble wall. Then he hired, with a little gold and many a promise, peasants to excavate for him.

They uncovered the shaft; cleared the descending steps; removed the debris from before a final blank wall of granite; hacked through it a hole for him, out of which rancid vapors gushed. Bleek sent them away, with yet more promises for the morn, and when they had gone with the dusk he lighted a torch and entered the foul chamber.

The revealed stone room was neither large nor adorned, a cramped oblong containing only a squat basalt dais, upon which lay the unmarred, perfectly preserved body of a man wrapped in white silken grave raiments. Though a marvel to behold in that state it was surely a dead thing, as the dryness of the exposed flesh of the face and the utter lack of subtle motions of life confirmed. On its breast resided a large, heavy cross of gold, studded both lengths with numerous green jewels resembling eyes, the remainder of its surface thickly inscribed with unknown hieroglyphics.

This cross Bleek meant to take on the moment, knowing for certainty that it was none other than the fabled Cross of Xenophor itself, but when the wizard reached greedily for it the corpse suddenly threw off the wrappings from about its arms, clutched firmly at the cross and rose to a sitting position with astonishing vitality.

The mortified man opened haunted dark eyes and, gazing upon his visitor, said in a weak, airless voice, “Jacob Bleek, mage of a time beyond mine, take not this wonder from me. Yes, I know thee, and much else, through the power of this cross, artifact ancient, instrument unholy and sacred. It can do thee no good, while its loss would leave me in despair. Harken to what I tell thee.

“In life, while I dedicated myself to the foundation of the Church, I was also truly a man like thee, given to weird humors and unslakable lust for arcane wisdom. This drove me to seek this cross, fabricated by inhuman hands at the dawn of creation, a conduit of the power inherent in despicable Xenophor, whom a long lost benighted age worshipped as the True Lord. I gained it, absorbed its radiating wisdom, sought to further with it benevolent ends while at the same time waxing mighty myself.

“For my gentle beliefs, as well as for my conniving schemes, I was sentenced, in audience before the noxious Egabalus, to a hideous fate, the dread penalty of living burial beneath the gay dancing of the Emperor’s merry throngs, the disgraceful revels in which I had stupidly taken part out of weakness. Our cruel master’s minions laughed as they dressed me in these horrid robes, led me into this chamber built for the purpose, sealed me inside, forever more thrust into the dark, there to die by loathsome degrees.

“They feared, however, the object which made me fleetingly dangerous, chose from fear to entomb the cross with me. Then it performed its most evil miracle, one unasked for by this poor sufferer, who never dreamed of the possibility. For although I died here, when I drew the last breath of wholesome air, I found that a grim consciousness remained to my mind! I existed without life! And so I have endured throughout the black centuries, a hopeless, breathless prisoner in my own lightless tomb, nearly crazed by my situation, doomed to eternity here, yet not daring to seek remedy for the horror. With the ages my essence has faded, and my control of the cross has died, so that nought remains to me but feeble existence.

“Understand this, Jacob Bleek: though this wearisome fate is endless torture, I dread nothing more than the loss of the evil cross that pitifully sustains. Were I to depart this sphere, this wretched realm of miserable, false entity, I fear the wrath of my God, who surely would call me to account for my sins. Terrible though that would be, I fear still something more: that I might be taken into the substance of Him, the monstrous force behind the cross, baleful Xenophor, whom the unspeakably depraved call Lord of All Things, Creator and Destroyer, First Cause and Last. That would truly be nightmare without end, without hope.

“I beg of thee then, Bleek, wise sorcerer, to let me lie with this cross, and seal me again beneath the earth, forever out of sight.”

Bleek listened considerately, attended quietly, paid heed to all that was said by Thoracrates, and, when the dead man ceased to speak, Bleek yanked the cross from his grasp and departed the chamber, ignoring the woeful cry, the grotesque physical changes that immediately commenced. Little remained but dust by the time he set foot on the stone stairs.

The wizard departed for Rome at once, without thought of his peasant laborers, and took the cross direct to his rooms, feeling at every step the power coursing into his body and soul. All that night he experienced the revelations of knowledge and power opened to him, gaining a great deal, hungering for more, but with the dawn his iron brain seized control, cautioning him against the perils of unlimited use and application; with a gigantic wrench of resolve he put by the thing in the nick of time, bundled it in burlap and sought the marketplace. There he greeted anew the Blind Man, that strange seer, and told him of what had transpired, granting a peek of the fingers at the prize, and offering it as payment in return for all the knowledge that grand fellow possessed.

The Blind Man grinned, his lusterless eyes oddly brightening, ushered his guest into the shut-in alcove where he lived, and there they did the deal. Bleek learned that which would carry him onward to freshly rewarding adventures, while the Blind Man acquired that which would give him every kind of sight, including, he hoped, that which he most lacked.

“They have esteemed and honored me,” he said, as he took the cross into his hands. “Now they will obey me.”

The Blind Man sighed dreamily, lovingly cradling the ornate object, pressing it to his breast. “I see,” he cried, “I see the ultimate truth!” But then he screamed, and he kept on screaming, while Jacob Bleek took his leave without word, departing with those soul-rending shrieks echoing in his ears.

Thanks for reading - but we’d love feedback! Let us know what you think of The Cross of Xenophor on Facebook.