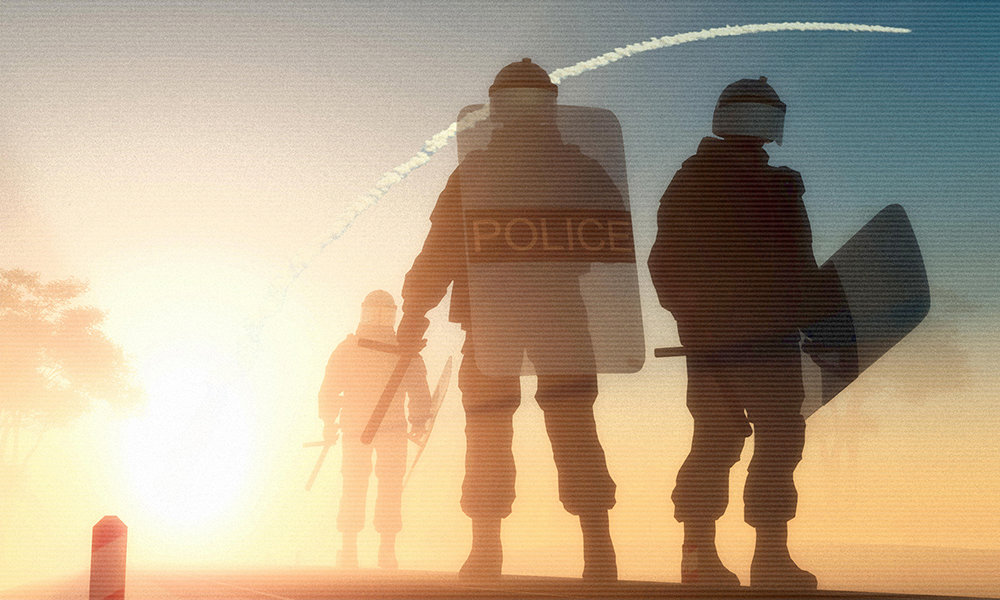 he lynching of poverty campaigner Noah Samuels took place this morning, but otherwise a good day. I admit I was disturbed by the news. A young, handsome gentleman, barely out of his twenties and famous for his athletics career, to see him hanged like that before the mob was shocking for all of us common folks. When the news started coming through on our devices we gathered in huddles on the factory floor, fearful and whispering. Mr Aled who oversees our line was saying What kind of people are in charge these days? Is there no justice, are there no consequences? He let us take an unscheduled fifteen-minute break and sent us home half an hour early, as there was a demonstration in the cement park. I didn’t go to that.

oke to news that the demonstration was broken up after only an hour by police. Full riot gear. Numerous arrests, reported on the main news, many more accounts of police violence across social media. Errol A and Lars F didn’t show up for work, none of us wanted to ask Mr Aled what had happened to them. Mr Aled was quiet all day. Made me wonder if he had been admonished by someone higher up.

nti-Colony protests have broken out across the city. More police, more arrests. The Colony spokesman broadcast a message to every device, stating that Noah Samuels had been a criminal and involved in drugs and that in any case the Colony took no responsibility for his death, or for the subsequent unrest here on Earth. We listened in our factory lines, in our aching work boots. The spokesman was smooth-skinned and well-dressed and spoke so confidently you almost believed him.

I went straight home after work. Every door in my compartment block was shut, every stairwell deserted. I locked my compartment door too and put the blinds down but I couldn’t stop my device from murmuring the news, showing pictures of protestors, faceless cops, Noah Samuels on the end of a rope. The newsreaders were serious people in suits. The adverts in between all showed images of the Colony: spotless streets, happy beautiful people, expensive buildings. I want to walk those spotless streets and breathe their purified air.

ne can dream! Today Prior S was notified on the Lottery App that he has won a ticket to the Colony. It comes with a work permit and an allocated compartment when he gets there. We all stopped work to applaud and Prior S had tears in his eyes. My friend Wharton H was muttering about how factory work isn’t going to be any different there to here, but I nudged him to keep quiet.

He said to me afterwards that the Colony must have added a bunch of extra tickets to the Lottery purely to distract from the protests down here, because his brother at a different factory also knows someone who won a ticket today. Wharton H thinks it a cynical measure. He is always unimpressed by colony propaganda, as he calls it. I told him not to say anything to Prior S.

There was an enraptured look on Prior S’s face, the look of someone who has allowed himself to dream and wishes not to be woken. Sweat blossomed from his bald head and his dreams moved like slow fish behind his eyes. I stared at his lucid skull and wanted to pour my thoughts inside.

rior S has already gone. In the break room Wharton H and I watched the livestream of this morning’s Mars shuttle, with Prior S somewhere inside. The shuttle looked bloated and blank-skinned. It rose into the sky ponderously from its bed of fire, like a half-inflated balloon.

We had a scheduled speaker at the social club tonight: an earnest, no-longer-young woman who shifted around in her oversized shoes as she talked. “Poverty is a prison,” she began, looking at us each in turn with childish, beseeching eyes. After that I stopped listening.

harton H not at work. I sent him a text during lunch break but he didn’t reply until this evening. Said he had been protesting at the site of the Samuels lynching. People calling for food vouchers, lower work quotas, repeal of the Mars Export Laws. Might as well call for the sun on a stick. Said he kept his face covered. Was with a big group from his brother’s factory and they left before police showed up.

All the same I am sick with worry. At work they sent round a special bulletin to our devices, emphasizing the company’s core values. “We are proud to support the Colony project. We strive to secure the future of the human race. Earth today, the Colony tomorrow. We must never forget the debt we owe them.”

Wharton H would say the debt is the other way around. Rich pioneers of the Colony take our exports, grain and metals and fuel, sit up there in their red millionaire’s playground laughing their socks off.

idn’t know what to do with myself on my day off. Wharton H called, asked if I wanted to go for a walk. Said I wasn’t sure it was safe to go out (also true: didn’t want to be seen with him, just in case). Spoke to mother on the phone, told her to stay indoors.

Ran out of cigarettes, walked to corner shop. Someone has daubed slogans all down the stairwell of the compartment block:

SOCIETY IS A MYTH

UTOPIA IS AN ISLAND

better day, anyway. Wharton H was back. We all crowded round him in relief before our shift started, patting his arm and checking he was really okay. I stuck close to him all day. He told me in whispers about the protest, his eyes shining, clear in his belief that things were about to change. My guts twisted from listening to him. In the break room at lunch I sat my chair so close to his that our legs kept knocking together under the table. I mentioned the slogans on the wall and he said they are only half-phrases, there is more to them than that. If the poor have nothing else to eat, they will eat the rich. Utopia is an island you can’t swim to.

What is Utopia, though? I asked. He thought it was something medieval or maybe to do with universal income. It was obvious he didn’t really know.

He came round to my compartment for dinner. The slogans in the stairwell had been joined by a mural of Noah Samuels’s face. Wharton H stood in front of it for a moment with his head bowed.

xtremely. Mr Aled has been replaced. New line supervisor (Mr Cable) is small and thin and always looks distrusting, even if he’s just asking you to fetch coffee. He took Wharton H aside ten minutes into our shift. Wharton H came back solemn, wouldn’t tell what had been said. Mr Cable’s device has the Party insignia on it. Always slipping it in and out of his pocket as though checking it hasn’t been stolen.

Was called into his office too later on. Stood in the middle of the floor, feet aching, he sat by his computer. He said was I close to Wharton H, asked why he was off sick, if he’d gone to the Thames Park protest, if I’d had any thoughts about going. Said I don’t think about things like that. Mr Cable said maybe Wharton H does my thinking for me. Asked what I thought about the Noah Samuels matter. Said it was sad. He said our company defines us, the company we keep and the one we work for, told me I’d do well to remember that.

urals of Noah Samuels popping up all over the city. As fast as the police erase them, they paint more. Some mourners held a memorial service in Thames Park. His family were there, some high-profile athletes too. Watched clips on social media of police charging them with raised batons, forcing them away from the tree, tearing down the picture of Noah they had pinned to the trunk. His name has become a hashtag. Everywhere you go online, #NoahSamuels is with you.

Wharton H’s brother has been arrested. He told me over lunch. Whispering. He looks hopeless now. Tried to say how relieved I felt that it wasn’t him, but it came out wrong. Told him to keep his head down for the next few days. He ate dinner at my compartment again. Asked him to stay the night but he refused.

very day a bad day this week. No sign of Wharton H at work. Don’t know if he was arrested this morning, or last night on his way home from mine. Don’t know where he is. Have wild hopes he might have run off somehow, escaped into the hills. He is smart and strong and could probably last a good long time before they caught him. But the city is big, the hills are far away.

he news said Wharton H’s body was found in the canal, that he had been party to an altercation, a drug deal gone wrong. It’s a lie. We all know it. There was a photograph of the canal bank where he was found, made me throw up on the break room floor. Everyone at work very kind, except Mr Cable, who avoided eye contact.

At lunch I sat next to Mr Cable. He was reading something on his device, didn’t talk to me. While he ate I slowly edged his car keys further and further out of his pocket. When he stood to go and rinse his plate, the keys slipped neatly into my hand and I went to the bathroom and squeezed them to the bottom of my work boot. All afternoon the keys grated against my skin through my sock.

Towards end of shift Mr Cable called over McPhail R, needed a word in his office. I watched them go in and shut the door then I walked slowly off the factory floor, shoulders hunched, expression dull, so the other supervisors would think I was carrying out some routine task. I walked past them all and went down in the lift to the underground carpark and no one stopped me. In the carpark I bleeped the keys and Mr Cable’s car flashed its lights. It was nice, smelt of new leather. I drove carefully out through the barriers, and the guard waved as I passed.

stopped in woodland, somewhere north, hard to be sure. I worry they will track the car. I stripped its electronics, as far as I know how, left it concealed in the bracken, walked until it got too dark.

Device power will die soon. When that happens I will strip it too, destroy its SIM, bury its parts and keep walking.

Keep looking at my photographs of Wharton H, knowing each time might be the last. I dream of the two of us walking clean streets and breathing the pure air of the Colony, in rich people’s shoes.

I dream of possibilities, of choices, of an escape from this world where there is no why and no because, there is only the predicative.

Utopia is an island. Poverty is a prison. Existence is a debt.

Thanks for reading - but we’d love feedback! Let us know what you think of Utopia is an Island on Facebook.