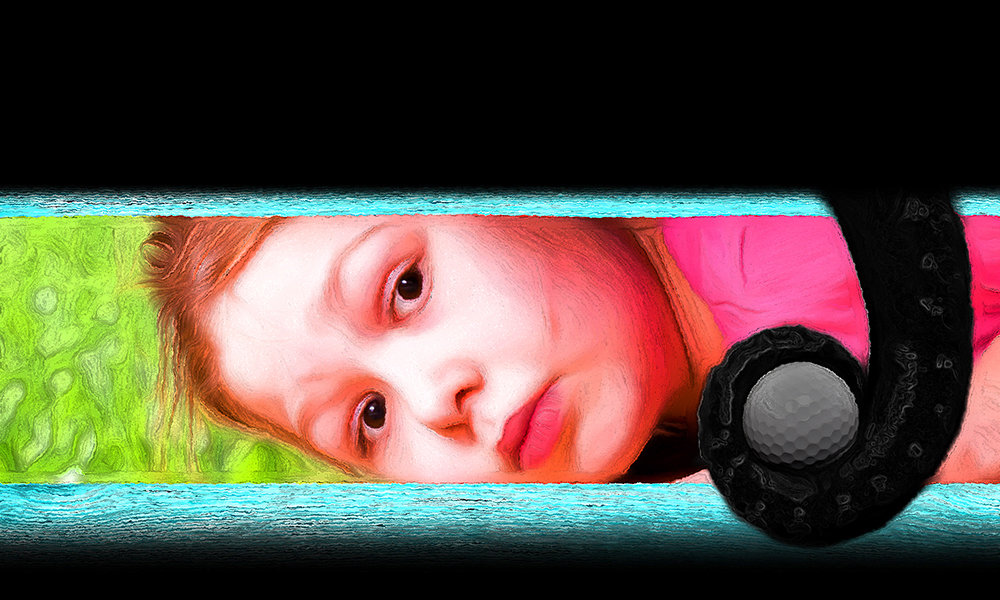 mi scowled at her sister and watched her nonchalantly tap the ball with her club. It rolled across the Astroturf, bounced off the curb, trundled over the bridge and popped neatly into the hole at the end.

“Don’t whine, sweetie. She is four years older than you. You’ll be just as good when you’re fourteen.”

Ami glowered as Bea marked her 1 on the scorecard next to Ami’s 6 with an arcane smirk.

“It’s not my fault you’re a rubbish sister,” Ami said and stomped towards hole six.

Bea hadn’t always been a rubbish sister. Ami could hardly spot the sweet girl who used to braid her hair and read her bedtime stories behind those midnight eyes. She missed her and the bond they’d had. They’d been drifting apart for years, though, ever since Bea had started volunteering at the library after school. Now, instead of watching cartoons together until dinner, she spent all her time with that weird librarian who Bea absolutely insisted was not her boyfriend. But Ami wasn’t stupid. Why else would she be spending so much time surrounded by dusty old books?

Ami scrunched her lips together and focused all of her concentration on the next shot. She whacked the ball up the slope with all her strength. It careered away, hit the wall at the top and rolled back down to nestle between her feet. Bea cackled.

It took another four attempts to get to the top. Then the ball refused to go round the corner and skirted the hole three times. Ami gouged 9 onto the scorecard while Dad set up his ball.

Three strokes later it was Bea’s turn. She grinned as she swung her club. The ball shot straight to the top, ricocheted round the corner and rolled directly into the hole.

“How’s she doing this?” Ami yelled. “Dad, she must be cheating! There’s no way she got this good since last time.”

“Don’t be silly, Ami. How could she possibly be cheating? It’s just luck.”

On hole seven, Ami’s ball refused to go around a boulder, bouncing off it a grand total of five times. Ami screamed with frustration.

“You’re taking this way too serious, Ami,” said Dad. “It’s supposed to be fun. Have a laugh!”

“No! It should’ve gone past, I know it!” Ami narrowed her eyes at her sister. “You’re doing something. Stop ruining everything!”

“Ami, if you’re going to make a scene we’re leaving.” Dad’s eyebrows furrowed in the middle as he stared down at her. She turned away, heat creeping up her body towards her face. She caught a glimpse of Bea’s eyes, twinkling with delight. She flushed.

They continued around the course in silence. Dad attempted to lighten the mood with a tirade of excruciating puns but gave up around hole eleven. Bea silently gloated while Ami seethed.

By hole eighteen, Dad was at forty-nine, Ami was in triple figures, and Bea was at seventeen.

The last hole was a white-washed windmill, with electronically propelled sails and a tunnel through the base. A slope on the other side dropped the ball through the final hole and back into the ticket booth. Ami smacked her ball with all her pent-up rage and was shocked when it shot into the tunnel.

Ami went round the windmill. The ball was nowhere to be seen.

“It’s stuck inside!” she cried.

“But that would be cheating,” Bea taunted, loud enough only for Ami to hear. Ami frowned at her sister, who smiled sweetly then turned to watch Dad tee off.

Dad scored five before his ball plopped in and trundled off to the booth. Bea took one last hole-in-one. Ami was too busy examining the wooden panels of the windmill to notice Bea basking in Dad’s congratulations as he slotted their clubs into the returns tray on the ticket booth wall.

“Come on, Ami, lets go,” he called from the gate leading out to the car park.

Ami set her jaw. “I want to get my ball. I haven’t finished.”

“It’s really not worth it.”

“It’s not like you’re going to win,” Bea added. The shadows of the rotating sails glided over her pale face, transforming her expression from smug to blank and back again with each passage.

Ami ground her teeth and slid her fingernails under the cracks around the loosest panel. With a grunt, she tugged until it splintered and fell into her hands. She propped it up against the side of the structure and knelt to look inside.

It was disproportionately black. Tiny arcs of daylight shone on either side where the balls entered and exited, but other than that Ami could see nothing. It was weird—the windmill wasn’t big and the sun was bright outside. She stared, transfixed by the black hole, squinting around for a sign of her ball.

She wrinkled her nose at the stale, fishy air and reached inside. The floor was hard and damp as she groped around into the corners. Goosebumps run up and down her arm at the chill. It must be in there somewhere—balls don’t just disappear.

“Bea and I are leaving,” Dad called again, and his voice seemed further away, as though he was shouting at her from the other side of an expansive chasm.

“Just a minute!” she shouted back.

She crawled in through the gap.

It felt somehow much larger than it had appeared from the outside, but also crowded, like a cupboard full of coats. She shivered and blinked, adjusting her eyes to the dimness, peering around for that elusive white sphere.

A sucking, squishing, slurping sound from above startled her. She looked up.

Inches above her face, a massive eye glowed in the shadows.

A scream rose in her throat. It escaped as a gurgle and a tiny puff of vapour in the cold blackness. Every muscle in her body clenched, except her heart, which pounded as hard as a piston. The enormous pupil shrank, zooming in on her.

Despite the oppressive closeness, Ami felt herself beneath an overwhelmingly vast and undulating emptiness. As she gazed up into the luminous eye, she thought she glimpsed reflected in it a dim city of impossibly tall buildings with vacant windows. It was like looking at the inside of a spoon: distorted and wrong. Silence rang in her ears until it became the sound of distant screams.

A thick, black tentacle uncoiled towards her, glistening in the feeble light. A tiny whimper rose in her throat, but her petrified body refused to move. The oozing, boneless limb wound through the space between them, reaching for her face.

It was holding something pale and round.

Stuck to the suckers on the end was her golf ball.

With a wrench of will, she raised her hand. The tentacle hovered before her, waiting. She tugged the ball with trembling fingers and it came free with a moist squelching noise.

The feel of the glossy, pocked surface under her fingertips, so solid and mundane, prompted the rest of her joints to thaw. Without turning away from that colossal, unblinking eye, she began shuffling backwards to escape the windmill.

The bottomless pupil swivelled slightly so that it still pointed right at her. Just before she ducked outside, a thought pushed through the terrified fug of her mind. If she left now, she’d always wonder.

“Um… excuse me…” she said, voice very small as she knelt before the rippling darkness. She paused and cleared her throat, then before she lost her nerve she blurted, “Have you been helping my sister cheat?”

Cheat? The voice spoke directly into her brain without coming in via her ears. A voice that spanned dimensions. Ami’s heart pounded so hard she thought she might be sick. Bea paid the price for power. It is up to her to decide what is fair and what is not.

A vision of that desolate place flashed through her mind again: a twilit eldritch world, eternally void of hope or joy or comfort. She thought of Bea with a shiver and an unfamiliar pang of sympathy.

“Okay,” Ami said, scooting backwards. Then, just before she emerged into the sunlight, she added: “Thanks for the ball.”

The glare of the whitewashed windmill in the late afternoon sun was blinding. She squinted around as she rubbed the goosebumps off her bare arms. Same golf course. Same ticket booth. Same bright afternoon. But try as she might, she couldn’t get warm.

“Come on!” Dad shouted as she pressed the panel back into the gap. She averted her eyes, just in case she spotted something moving inside. Then she hurried away before her ordinary world disappeared into darkness again. Dad and Bea were waiting in the car park on the other side of the white picket fence.

As she jogged past the final hole, Ami dropped the ball into it. “Hole in one,” she quipped, full of fake joviality as she returned her club then pushed her way through the gate.

“That’s the spirit!” Dad said with a smile, strolling towards the car.

“Aren’t you going to thank me for a good game?” whispered Bea as they followed behind.

Ami turned to her sister and met her abyss-like eyes. Behind them, she thought she could glimpse that realm of shadows and ruin. Ice tiptoed down her spine. Her pulse sped up again.

“I already thanked the real winner,” she said.

Thanks for reading - but we’d love feedback! Let us know what you think of Umpire of Desolation on Facebook.