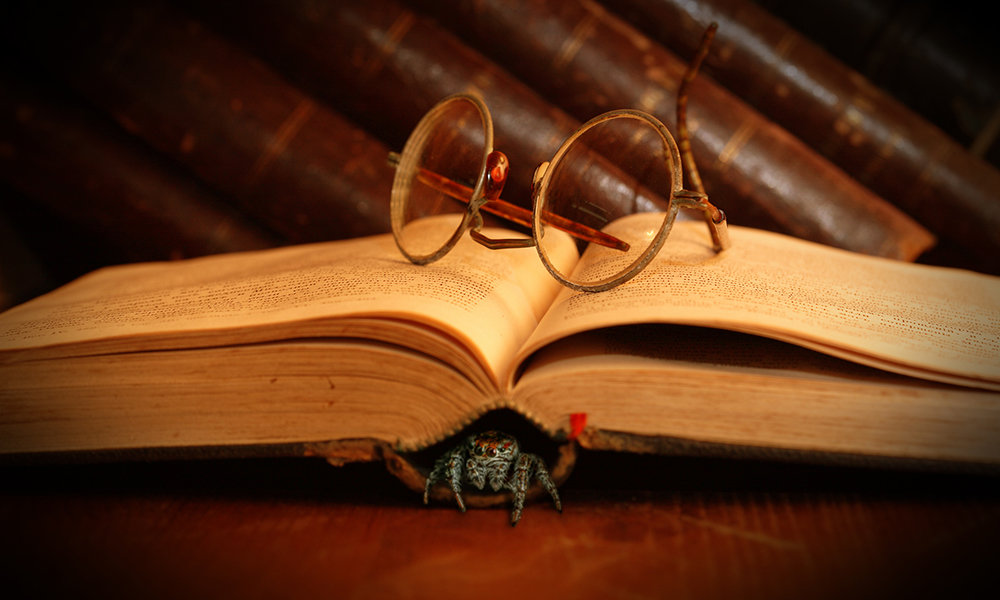 abitha was about as unimposing as it was possible for an old lady to be. It was a practiced act; one she had honed. She always carried a black umbrella, regardless of the weather forecast, “just in case.” She kept her white, thinning hair short to stay out of her eyes, which were failing a little and required the aid of reading glasses that dangled around her neck on a silver chain.

All suitable old lady accoutrements. All things she knew helped deflect suspicion of what she had hidden in her archives. For she refused to retire from her position as head archivist, stubbornly presiding over a collection that was similarly unimposing, to the un-informed visitor.

No other archivist had dared to violate inter-species peace treaties to preserve archival materials, and certainly not with as much guile as she.

At the close of the Spinneret War, the peace treaty called for non-communication between humans and spiders. Tabitha held many opinions about this clause, and its inclusion of written texts. Short-sighted, Tabitha thought. Arrogant, she believed. “An affront to their entire profession,” she had told the archivists and library professionals’ listserv. Sensing what was to come from such a heavy-handed and sweeping clause, Tabitha squirreled away an English-to-Araneae dictionary deep within the archive’s secure storage vaults.

The dictionary was not as glamorous sitting on the shelves as a volume of poetry by Plexippus petersi #6734891, or an anthology of the metafictional works of Linwood Russell (in translation by Vulf the Wolf Spider) might have been. But those works had all been gathered up and locked away in some government vault to make inter-species communication an absolute non-possibility. Tabitha still held all the building blocks for discussion, housed in a thick little book with a red cover.

In the aftermath of the treaty and its terms, Tabitha saw spiders less and less in the archives, as they withdrew to their most distant holdings, such as the rare maps storage vault. Tabitha thumbed through the dictionary on her breaks, picking up what words she could. A simple “Hello, I’m cleaning” would go much further in terms of peace than non-communication, she felt. If she accidentally vacuumed up a family of spiders while cleaning the vaults the fallout would be unimaginable.

And she did need to clean, for the withdrawal of the spiders made the silverfish grow bold; the archives were dustier than ever with frass and bits of exoskeleton. Tabitha felt that the military officials and diplomats had done a grave disservice by overlooking the potential for alliances between their two species. An entirely new approach to integrated pest management could have been pioneered. Archives need never again fear the tyranny of chewing bugs, if only the spiders could have been recruited.

Teamwork was always good for relationships, as was the ability to apologize. “Sorry about the noise,” would lessen the apocalyptic feeling of the vacuum whirring to life. It was a gap in Tabitha’s slow reading of the dictionary. One she should amend. Tabitha went to the dictionary shelf, ready to arm herself with peaceful words.

A cold weight settled in her stomach. The last public remnant of Araneae lost, under her watch! Could a researcher have taken it? No, surely, they would have immediately publicized their findings. Maybe an intern misplaced it? No, Tabitha had barred them from this section to keep her secret hidden.

She ran her hand over the empty space on the shelf, as if the book had turned invisible and would appear by touch. When she drew back her hand, no book came with it… but remnants of one did. Scraps of yellowed paper stuck to her fingers. The presence of loose bits pointed to a devoured book.

And worse, a full-blown silverfish infestation.

Tabitha whirled, eyes darting over the forgotten corners and shadowy under-shelving of the storage area. The silverfish could be anywhere, watching her. Anywhere, snacking on the “N” pages of the dictionary, perhaps, the noun of “noise” lost forever. Anywhere, mocking the failure of her pest control plan.

The obvious solution would have been to ask the spiders for help finding the dictionary, but she would need the dictionary to do that. A circular puzzle, similar to needing ones glasses to search for them when misplaced. Tabitha reflexively checked her readers were around her neck—still there.

She coiled part of the chain around her finger. She had to hope it was a simple misfile. Otherwise, the specific and targeted choice of food in the dictionary pointed to a planned attack, and a marshaling of silverfish forces that Tabitha did not want to think about so soon after the end of the Spinneret War. Worse, such an attack meant her whole collection was now at risk. Priceless photos, rare maps and journals, all lost under her management. She would certainly never be employed in an archive again.

Tabitha perched her readers on her nose and steeled herself. She would hope for the best and work backwards from there. She donned her white cotton gloves, which were loose around the wrist from so much use. She couldn’t lose her head and mishandle anything in the archives, crisis though this was.

If it were a simple misfile and not a silverfish plot, she normally would dump the search through every shelf and archival storage box on an intern. But she didn’t want to make any of them an accessory. Tabitha of course did not play favorites with the interns… but Joaquin was her favorite. Yet she couldn’t involve him. Which was a shame—Joaquin had a knack for finding things misfiled.

So, under the gaze of the thousand silverfish which she suspected to be hiding underneath the flat files, she began searching for the last remaining English-to-Araneae dictionary.

She started with the shelf where the dictionary should have been and worked outward. As she hunted, she saw silverfish skittering across the floor out of the corner of her eyes. Throughout the shelves, Tabitha found scraps of paper fallen from chewed-up pages. Not even enough left for a conservator to work with. She couldn’t even lay out sticky traps as she would have pre-war; spiders were just as prone to wander into them as silverfish. The only option that remained in her pest-management arsenal was the hoped-for enlistment of the spiders. They could be brought on as interns too.

Tabitha sighed, dreams of spider alliances receding, and took a long look around the shelving and archival boxes, at everything that would be lost under her watch. She returned to the dictionary section and stared hard at the empty space on the shelf. Maybe she would have to bring in the interns. Maybe she would have to admit to the original crime. Maybe another interspecies war was brewing right beneath her feet. The silverfish meant to keep her from ever forging an alliance with their enemy the spider, and to remove her from her position as head archivist and guardian. Then the archives would be easy snacking.

She was about to give up when something caught her eye. A common house spider, no bigger than her thumbnail, was standing on the book that should have sat snug against the English-to-Araneae dictionary. It waved its two long front legs at her. Perhaps at least eight of the eyes she had felt upon her had not been those of the silverfish forces, but of a friend. The treaty had done the little synanthropes as dirty as it had done archivists, after all.

Gently, so as not to create an air current that would blow away the small arachnid, Tabitha waved back. The spider brought its legs down in a quick and succinct tap on the spine of the book it stood atop. Tabitha read the title emblazoned there, and her eyes widened. Not quite a dictionary, more of a phrasebook, possibly warranting refiling later: Scorpionid for Beginners.

The spider had found her a possible way out—Scorpionid and Aranaea shared the same ancient root language of Arachnid. There were some overlaps, words that stayed the same in either tongue, save for the addition or removal of an extra chitter or click. The illicit dictionary might be lost, but she could still save the archives from ruin.

She reached out a gloved hand towards the book, and the spider scuttled off to the side to allow her to take it. How poorly it had been named, for a creature so capable of such a singularly uncommon kindness.

Tabitha flipped through the pages, looking for the right words of help. She could still save her archives, pioneer a new era of spider-human relations, and present her new integrated pest management plan at the next big conference. But for all her practice in Araneae, Scorpionid was still a different language, and she would need to start at the beginning. She turned to the Greetings and introductions section.

“Nice to meet you,” was always a singularly good place to start.

Thanks for reading - but we’d love feedback! Let us know what you think of Silverfish, Noun; Help, Verb on Facebook.