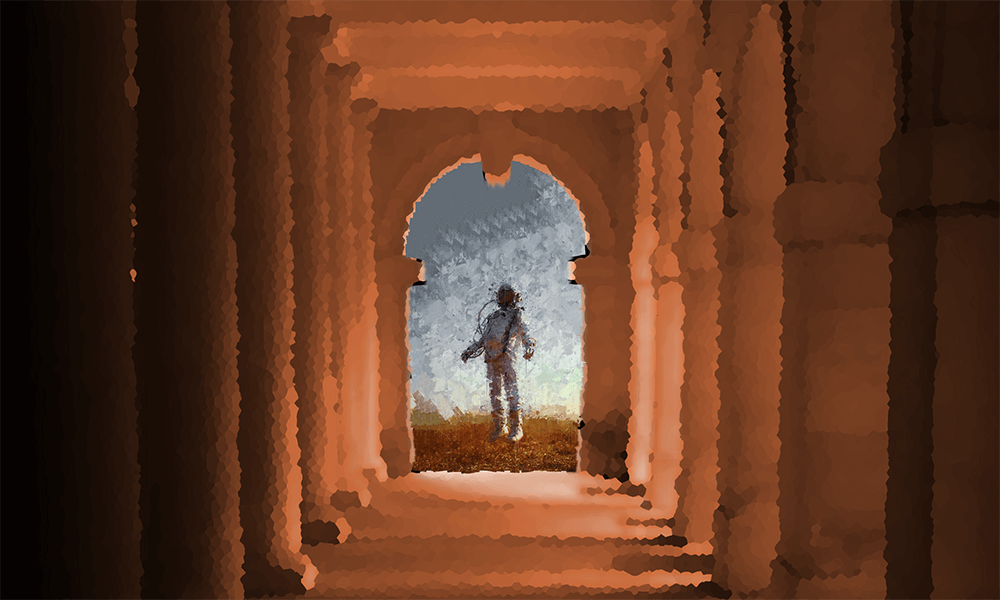 ust red Martian rain pelts my hardsuit like birdshot as I trudge through the mud, trying to get a visual for base. An ancient building, exposed by the terraforming storms.

“The surrounding hillside’s melted away,” I say, pointing my cameras towards a pair of pillars that look like dicks. “You seeing this, Base?”

“We’re receiving, Steph,” Base says. Cheers and applause and amazed curses. I can’t help but smile.

The mud of the hillside looks like it could sludge over at any second, covering the opening again. “Structure looks stable,” I lie. ”I’m going inside.”

No one back at Base objects. With the surface as volatile as it is, this might be our only chance. My heart is pounding in my ears. Adrenaline hitting my system like atropine.

I go up three crumbling steps and huddle in the opening. Runnels of red water trickle down the narrow corridor, piles of ancient dust swelling, growing tumescent. At the end is a single cavernous room. I pray that what waits in there will be a trove of art or books or recordings they held dear. Historical records that might tell us how they lived, and what it was that caused their collapse and extinction.

Shining my suit lights all over, my heart throbs in my chest at what I see. Shelves all along the walls, and on the shelves, little statue things, each about as tall as my glove. I pick one up and brush it off. It is a perfect specimen.

“Steph,” Base says, all broken up. “Steph, do you copy? We lost visual. Can you describe?”

“It’s just more dicks,” I say. My mouth is dry, all my enthusiasm drained in an instant.

“It’s more dicks. Most of them are about three-inches tall, but some are bigger.”

“Can you get pictures?”

I want to argue that I have better things to do than take pictures of mummified martian dicks, but I know what the response will be. Some of the dicks might be different. One of the dicks might have a deformity that might inform us about martian physiology and their susceptibility to disease. Or it might indicate dietary changes that caused nutritional deficits, or changes in the atmosphere brought on by pollution. For all we know, the martians might have preserved these dicks precisely because examining them will closely reveal the secret to why their world died.

Those are the arguments that Base will make. This is not my first dick temple. Base will make me come back to the site in a few days, like they always do. I will be ordered to carefully collect the dicks and place them in a vacuum-sealed container. I will take the dicks back to Base to be studied and dissected by our scientists, who will confirm that the dicks are dicks. They will try to make inferences about the size or the quality of the dicks, comparing the dicks to the dicks they found at other sites.

There’s a short-lived media frenzy when the announcement of the third martian dick temple is made. I go on television, on some dumb talk show. The host asks what it was like to hold a martian’s dick in my hands. I pray that the nanny put my daughter to sleep early, that she’s not watching me publicly prostitute myself for funding.

“Which dick was your favorite?” the talk show host asks. “Do you think we might find a fourth dick temple?”

The question crushes me. I start crying on camera. Because I know we will find another dick temple. I know we will find hundreds upon hundreds of dick temples buried just beneath the surface. The martians buried those dicks for us to find. A hundred million years ago they looked into the abyss and saw their own mortality. They knew the end was coming and they met it with raging hard-on after raging hard-on.

I return home from my interview exhausted. My daughter runs out to meet me in her astronaut pajamas with footy slippers. I hug her and carry her to bed. She asks for a story about when I was on mars. I will hide the pain and the sadness, and tell her that we found something other than rooms and rooms full of dicks. Dick friezes and paintings and frescoes. Dick engravings.

I search for words to explain to her why a civilization went to such lengths to preserve their dicks, and nothing else.

“We’re still learning about them,” I say. A tear rolls down my cheek. “But I think that they were just like us.”

Thanks for reading - but we’d love feedback! Let us know what you think of “The Third Martian Dick Temple” on Facebook.