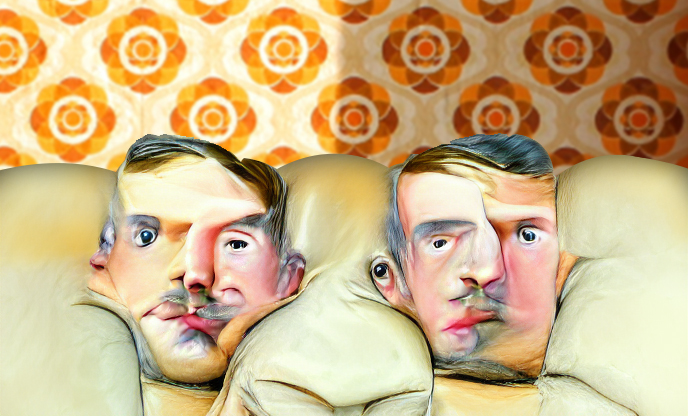 aul! Oh, we’re so glad you’re back. We, erm…” Mother glanced behind her, towards the living room. Paul frowned. She was behaving oddly. But that wasn’t the awful thing. The awful thing was that the open living room door revealed a pair of trousered legs and smart shoes.

Someone was sitting in his chair.

“Mother. You know I don’t like people sitting in my chair. They muss up the cushion. They make it all wonky.”

But whereas Mother would usually clutch a fist to her heart at being scolded in this fashion and insist on spilling out a desperate apology, this time she seemed as flustered as a schoolgirl complimented on her dimples.

“Peter?” It was a common enough name and Paul had known plenty that owned it. But none that might visit. And certainly none he could envisage being allowed to occupy his chair.

“He’s, well, I guess you could call him your twin.”

If someone could reach down into Paul Knowle’s forty-one year collection of deepest, darkest fears, and pull something out—something that was like an evil, sneering rabbit from a magician’s hat—then Peter Knowle’s appearance was all that. And more.

Because, up until five minutes ago, Paul Knowle had been an only child, in a world he alone owned.

But worlds, like parents—it was now clear to him—had a way of splitting on you.

he man calling himself ‘Peter Knowle’ was using gentle, self-deprecating humour to make Father laugh. Father was perched on the edge of his chair, displaying an eager, happy grin which faltered when he saw his actual son glaring down at him, but then shone again when Father returned to basking in his newfound, well, sun.

“Paul. This is Peter,” Father said.

The interloper twisted round and the two men viewed each other for the first time.

Not twins. Not even brothers. But, nonetheless, genetically identical in every way.

Somehow, they were the very same person.

“What the hell fool game of nonsense and rubbish are you playing here?” Paul managed clumsily. “We watch Antiques Auctionhouse at this time. It’s starting any moment.”

“I think we can forego Antiques Auctionhouse tonight, Paul,” Father said, far more bravely than he’d ever normally dare. “Under the circumstances.”

“I wouldn’t want to put anyone out,” Peter said. His smile was wide and cleanly white. His skin lightly tanned. And the hair swept off from, rather than stuck to, his forehead.

“You’re not doing anything of the sort, Peter. It’s alri—” Mother began, but Paul had heard enough.

“Then if you don’t mind.” Paul jabbed on the TV and snatched the remote from its pocket on the side of his chair and began waggling it impatiently to get the channel and volume he wanted. He kept his back to them, obscuring their view of Antiques Auctionhouse.

“Maybe we can leave Paul to his programme,” Peter said vacating the chair. “I’d love another cup of tea, Mother.”

“And when’s dinner?” Paul asked, though he knew it would be dutifully served up immediately after Antiques Auctionhouse. It always was. And he didn’t need to ask what it was either, because they knew what he liked. How he liked it.

“Could you stay to tea, Peter?” Mother asked.

“There won’t be enough,” Paul told them all.

“That’s okay—I won’t have much,” Mother said, making Paul’s jaw lock and a nerve slither up onto his forehead.

“I wouldn’t hear of it,” Peter said as he ushered them out and Paul grinned. That was an end to it then.

ut when Antiques Auctionhouse finished and he called out that it had done so, Paul discovered that rather than things being sensibly, correctly back the way they should have been, Peter had been busy with a frying pan and had concocted something for them all.

“I don’t like, erm…” Paul looked into the contents of the pan. He didn’t know what it was.

“That’s okay,” Mother said. “There’s plenty of Shepherd’s Pie for you, Paul. I think I’m going to try what Peter’s made. What about you, Father?”

“Oh, I’m game!” Father said, still with a ridiculous level of bonhomie. Paul wondered if Father was drunk. Mother too. If, in fact, the whole world had suddenly become drunk and he was the last sensible, sober person standing.

“Sure you wouldn’t like to try some? It’s a favourite dish where I come from. My speciality actually.”

“No. I’m fine with Shepherd’s Pie,” Paul informed Peter pertly. But something of what Peter had just said did need further investigation. “And where, may I ask, do you come from?”

“Ah, well now, that’s the incredible thing. You see: I’m you and you’re me. Here, I guess they’d have to call us clones. But we’re not. We’re exactly the same person—we’re just from different dimensions.”

Paul looked to Mother and Father and was dismayed to see they were both nodding, as if this was the most normal thing in the world.

“Isn’t it marvellous, Paul? I mean, if it wasn’t for the difference in names, you’d think you were just a man and his mirror image.”

As Paul and Peter examined each other a second time, it was pretty obvious to any neutral third party that this statement was way off the mark. It wasn’t just a case of chalk and cheese—more of chalk and cha-cha-cha.

his dessert is incredible,” Peter said. “I’ve always wondered how you got the apples like that.”

“Cinnamon, nutmeg… and I let the sugar burn ever-so-slightly so it caramelises,” Mother was pleased to relate.

Paul had finally managed to interrupt the pleasantries to get back to the earlier revelation. He arched an eyebrow to show his scepticism.

“Yes. Although things here are so similar, I guess they’re more parallel dimensions. Not exactly identical, because when I came through a few hours ago, I looked for Mother and Father where they live on my side, but they weren’t there. This is the house I grew up in though—so imagine my surprise when I found they still lived here!”

“We don’t live here anymore in your dimension?” Mother asked.

Paul swallowed. From the tales Peter had told over tea, they’d already discovered Peter had his own business, wife, two adorable children. Mother and Father had cooed like pigeons over the photos Peter had produced. Paul could guess what the next bit was going to be: Peter wasn’t living at home at forty-one.

“Mother and Father live next door to me now,” Peter said. “I wanted them, you, close to their grandchildren.”

“How lucky they are,” Father said. Paul kept his gaze rooted on a neutral portion of the tablecloth as his hands stretched out to claim the last portion of apple crumble. “Paul, do save some for Peter.”

“That’s okay,” Peter said, leaning back and tapping a perfectly muscled midriff. “Gotta watch the old weight.” Paul pushed his spoon between puffy lips, Mother’s wonderful secret recipe unable to make the apple crumble taste anything but bitter and jagged tonight. “This house is the same though. And the photos you showed me earlier are identical to all those my parents have got. Even that dreadful one when you dressed me up as Tintin for that fancy dress party.”

The three of them laughed. Despite all he had eaten, Paul felt hollow.

“The school photos are the same too. Except that I went off to university after St Giles.”

Peter raised his eyebrows. “No? Why ever not?”

“I don’t have to do exactly the same as you,” Paul said.

“No. Of course not. Each one of us has our own path to follow,” Peter said, nodding at the wisdom of this. “So… you changed schools?”

“In his third year. We moved him to Duckson High School.”

“Well, the boys there could be a little hard on the new kids. I remember my first few months there were a real ordeal. I can quite understand you wanting to change, Paul.”

“But you stuck it out?” Father asked, a worrying mixture of admiration and interest in his voice.

“Well, I guess I just realised it had its plus-sides too. I joined the rugby team, the football team…”

“Paul didn’t take to rugby,” Father said, and his voice was tainted for the first time by disappointment. Maybe even disgust. “Too rough. Again.”

“Well, it’s not everyone’s sport,” Peter said. “I had my fair share of broken bones and black eyes.”

Father knew well enough because he’d played in his own school days—and afterwards, until a knee injury had ruled him out. Mother now recounted the evenings when Father would arrive on her doorstep with a bandaged knee or a purple lump on his head like a ripe artichoke.

“I’m going to watch the news,” Paul said, pushing away from the table and standing up. He paused, waiting for Mother and Father to follow.

“You boys go along,” Mother said, reaching for the dessert dishes.

“Oh no, you don’t! I’m washing up!” Peter deftly slid the bowls from under her hands. “It’s the least I can do after that amazing crumble.”

“I also arrived unannounced, without flowers, and have intruded on your evening. So: no excuses.”

Paul hesitated at the door, wondering if he should create a precedent and offer to wash up too. But he felt the pull of the evening news, and all his programmes that came after.

n the end, Mother insisted on doing the drying up and Paul watched the news in silence with Father, both of them staring at the screen but not really taking anything in. Usually, Mother and Father would ask Paul about his day, how he felt, if he wanted anything more to eat. Then, Mother would get up to fetch his cocoa and biscuits.

Mother and Peter eventually came in, laughing so loudly Paul had to tap the volume higher. Mother had brought coffee, and some chocolates she’d got from Father on her birthday.

“This has been so nice,” Peter told them. “Meeting you all. Seeing you’re all so well. Tasting your famous apple crumble!” Mother cackled at that bit. “But I must be going back to my own dimension. I only chanced upon the way to come through. Now that I know it’s there though…”

“Maybe Paul would like to visit your parents, your dimension?” Mother offered on Paul’s behalf.

“That would be great!” Peter said and embraced Mother in a way that Paul never would have. Peter even gave Father a hug. “So long, Paul. Be seeing you.”

“Yes,” Paul said from his chair as Father and Mother accompanied Peter to the door. There was more laughter, more sounds of kisses, and sniffling from Mother as the emotion of the moment engulfed her. When the front door finally closed and they came back into the living room, Paul said: “There’s a film on in a few minutes. John Wayne.”

“I think I’ll go to bed,” Mother said, heading for the stairs.

Paul found himself alone with the TV, his chair and his thoughts.

It would be alright. Things would be back to normal tomorrow. He might even offer to wash up after breakfast. Not after dinner though—too many plates, and the ones from the oven would have food burned onto them. Roast tomorrow. His favourite.

Paul stared at the TV but was unable to concentrate as John Wayne entered yet another saloon with his trademark swagger. Tonight, for some reason, it looked like he was walking in pain. Like he was a tired, old horse forced to give one too many performances.

It was a long time before Paul felt strong enough to breathe out.

It would be alright.

Thanks for reading - but we’d love feedback! Let us know what you think of Fly Away, Peter on Facebook.