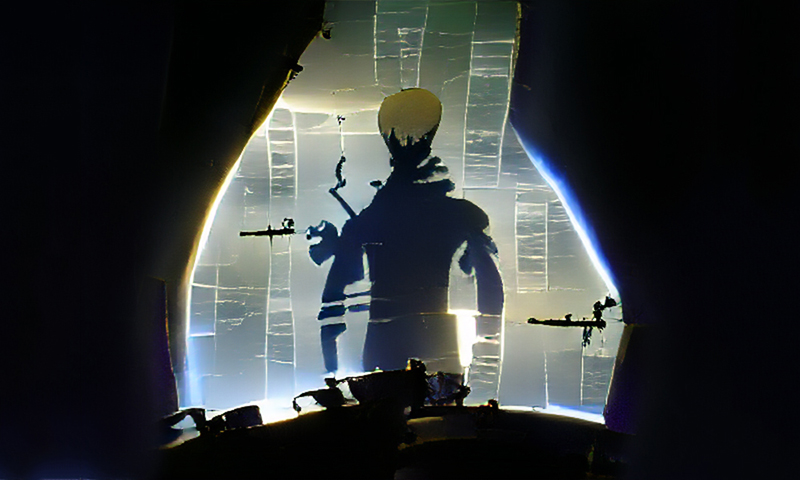 He’d made it clear he wanted me to find him and push him into his cremation oven.

“You better do it, goddamit! You hear me? Don’t let me down!” he spat, a fit of phlegm on the float screen hovering over my bed at 5am this morning.

It was midafternoon for him, and that’s exactly why he did it.

Saying he was a neighbor is a bit of a stretch. Neighborliness and friendliness are two vastly different things, case in point, but I guess it’s as good a term as any when you each share half the world.

We never officially shook on that. What belonged to me and what belonged to Jordan. He made it clear that I could keep Africa, so I guess the rest was up for grabs. He was mean at poker, or perhaps he was just mean, but I don’t think so. We always agreed on football. Regular season re-runs kept bouncing between satellites and into our float screens. I think he was just American like me. Same mold different metal, but in the end…

In the end he wanted to go down burning and who was I to say no to that?

y estate used to run to the end of the block, and we shared it with only three hundred other families. Progress was bound to make it all better obviously, there’s nothing like a trillionaire corporate philanthropist with his eyes on the stars to help out the little guy…

You’d expect the end of the world to come with a bang. Don’t. A push of a button doesn’t echo. The power never ran out and the water kept running. Couldn’t tell the difference from cable TV either. As long as the massive orbital engines kept spinning spider webs into a new universe, we’d be good forever.

And in a flash it was just us left. One empty planet plus the last two losers left alive.

Perhaps everybody else was dead, or doing the same old shit under a purple sky, makes zero difference.

My estate runs further than the Mongol empire now. Within, it encompasses half the riches of the world, slowly eroding to the elements. It’s an all you can eat buffet in any city on the planet.

The world has a value it never had before now. Because we’re gone. Welcome space invaders, you’ve inherited a gem. Don’t fuck it up.

unny how the ovens work. See through. Jordan’s body is lying on the platform, wrapped in black, encased in glass.

I finally understand why people are so revering of the dead. I was too young, barely twenty-two when I sunk a three pointer, turned to the empty bleachers, the bouncing ball echoing like a tomb around me, and…

What I’m saying is that I’d never lost anyone. Not true. I lost everyone. I was alone. So alone, so…

What I mean is that I’d never been to a funeral. I never realized how vulnerable, how humble a dead body looked once stripped of all the tiny cracks into the soul that life chisels into you. The wrinkles on your face, the twist of your lips into a permanent sneer, bright eyes that shine broken. Not now. He’s dead, peaceful like a sleeping tike.

A dead asshole was a dead asshole to me, and I expected to feel the exact same when I landed on Jordan’s rocket pad and shuttled to his home. It wasn’t his home, neither was my home “mine”, but since everything is unoccupied, why not move into the glass palace over the Serengeti?

he blue flames erupt and for a second I see them lick at his face.

I was… thirty maybe, when we first made contact. The initial shock still runs through me. First relief, then disappointment, rage, and finally acceptance. I’d just gotten a truckload of really sour lemons, and by fuck was I gonna make limoncello. I was gonna need it.

Back then I had scoured half the planet. Macchu Pichu, Kilimajaro, Tokyo, Moscow, Auckland… You know how long you can spend dancing naked on a mountain top when you lose your shit? A long fucking time.

All over the world and back, and yet. No one. No one, no one, no one. Not just people. The apocalypse… this was not even an apocalypse. A rapture maybe? Either way, no packs of angry dogs, certainly no zombies, enough food to last ten lifetimes and all you’ve ever wanted for free.

Madness is its own miracle. I went through its mouth and out its butt, but I made it through. I made peace. Peace with myself, peace with the anger lacing the deepest parts of me. Peace with a world I hated because it rejected me but desperately wanted to prove my value to. Peace with the schizophrenia of being who and what I am.

His body is gone now.

Walter Raleigh once surmised the weight of smoke. Perhaps it’s the same for the soul. Perhaps that was the real reason we chose cremation over burial, not overpopulation. Perhaps I’m a fucking poet. The last thing the world needs right now. It doesn’t need words anymore. It’s too late for words.

His soul is gone and, dark as it was alive, I want to believe the flames purified it. That they will purify me. But there is no one left to push me into the oven but myself. Perhaps I’ll set myself on fire at the end. No point in thinking about it now, it’ll happen when it does.

There are a few rites to complete before he is finally gone. The ash needs spreading on the breeze. There are a few words he’d written too. I should read them but I won’t. I’ll bet you it’s more senseless diatribe, or worse. The last thing I wanna read are Jordan’s dirty thoughts about his cousin. I don’t wanna ruin the moment. Just like humanity, he’s gone, and in that he’s perfect and that’s how I want to remember him.

wo plates of chicken-wings. Mine ready to be demolished, and his that never will. Two tall ones and two shots. Same story.

We only met once a year. Once you’re past forty you don’t really want to meet anybody more than once a year anyway, but in this case once a year was enough.

Super Bowl every year, re-run after re-run, year after year.

We started the tradition with the 1966 Packers Cowboys game, once we finally admitted that there was no one but us, and he got over “I can’t believe I’m stuck with a fucking (expletive deleted)!”

It was always harder on him than me, I knew America more intimately than he ever would. He was always a spectator. I was an extra in the shit show. The character you kill off right when he’s about to shine. I’m like Sean Bean but no one gives a shit.

So I knew and understood his demons, I’d seen them before, and I could see the human behind them in ways he’d never see me. I’m not saying I’m a great guy, I’m a straight up asshole, I just had forty years to come to terms with it, so I sound wise. I guess I appreciated his brutal honesty, it was refreshing, not facing someone who pretends to like you but hates your guts; or sometimes likes you, but superficially, your identity doesn’t matter one lick to them.

We’d made it all the way to the Giants Pats games of 2008. Atmospheric shuttles could get you anywhere in the world in ninety minutes flat and we chose Chicago. Mo Redman’s Sports Bar floating high above Lake Michigan.

Old games are super weird. It’s like watching jousting damn near. Respect for what they did without body modifications, but it’s the distance. You could delve into it with modern tech, watch the games in a virtual body, from the sidelines, QB, Strong Safety, your pick. That wasn’t happening anymore.

But that’s also what’s been keeping us from connecting more and hating less, all that virtual, all that remote self-righteousness. Hate can feel so warm and comforting. It’s when we finally sat down together, the mutual relief at not being alone. Man…

“Damned pleased to meet you!”

Best buds ever since. With the caveat that too much liquor brings out the truth of people and his was ugly, but buddies, in the urban friendly way of America: banter, the common man’s spite for politicians, and stats, endless arguing over stats. Anything to keep the social fabric intact, anything to avoid the issues.

We had all the beer and all the shots and all the wings we could ever want, and once a year we put all the bullshit behind and toasted to a game from a time long gone.

It’s the future. It’s the end.

And it’s now, only now, that it doesn’t matter anymore.

Thanks for reading - but we’d love feedback! Let us know what you think of E Pluribus Unum on Facebook.