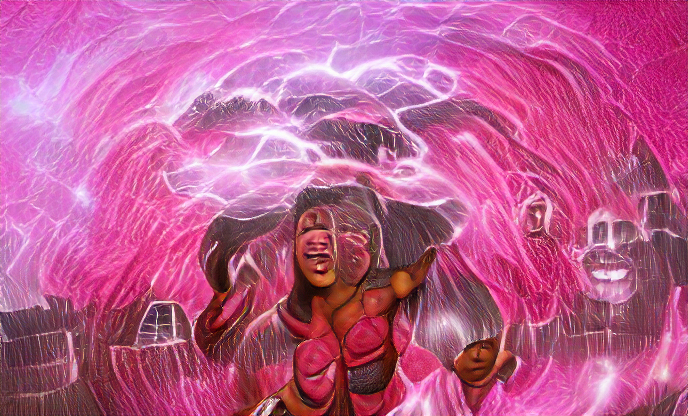 I’ve never been much into roleplay, but I need the money and Moyo would flip a lid if she ever heard that I balked now. The client isn’t all that bad either. He has this kind of boyish look on his beardless face, and he’d been wearing a suit when he approached me by the bar. I figured I could let myself get handcuffed to the bedpost while he attempted to play out his fantasies.

For both our sakes, twenty minutes later, I try to get into it.

The client’s fingers trail across the length of my thigh—bare, save for the new silk pair Moyo had given me earlier this evening. There’s a ring on one of his fingers that tempts shivers down my back over every surface it skims. Hoarse gasps escape my throat but the client’s hands stifle my lips gently.

His hands are large.

The client smiles. There’s something behind that boyish charm. It flashes in his eyes and lingers for just a second, but I cast it aside as lust when he brandishes two black scarves.

When the darkness falls, I feel his weight leave the bed. Embers of anxious excitement begin to warm the pits of my groin, so I don’t immediately notice that the client’s on the phone.

A sudden wave of icy apprehension ripples down my gut. Ẹbọ? As in sacrifice?

Fuck! I struggle against the cuffs but the cold steel only bites painfully into my flesh. I force a scream, but it’s only a futile hmmph. The client chuckles and my mind shrieks in terror. My limbs thrash about the king-size mattress in desperation until something heavy on the side of my head flings my world into fractured pain.

Air burns its way into my lungs and my furious gasp almost topples the glass of whiskey from my hand.

The lighting is shoddy, the whiskey is some percentages too raw and the client is talking. Now that I look closer, there’s a hardness behind his eyes—a dangerous glint behind every casual smile. How did I ever miss it?

But I already know where this all leads to. I reach into my purse to get my phone. Sorry Moyo.

He tilts his head. “Something wrong?”

I stand. “I’m sorry, something urgent suddenly came up.”

“That’s quite disappointing, I was hoping you’d accompany me upstairs.”

No, thank you, I think, but his suggestion simply supersedes my conscious thought. Instead of heading to the door I only wobble on my feet, and I suddenly realize that this is not mere intoxication. My body has lost all will to function… to him.

I see that look again, just briefly when he glances from my drink to my face. He met me here, there was no way he’d have roofied my drink without me noticing.

Then my eyes fall on the ring on his finger, and I see its arcane inscriptions, and the realization is as chilling as his phone call was.

The client is a bloody ritualist.

I find myself in front of the hotel again. Shit, that means I died after following the client upstairs a second time. At least an earlier awareness of my situation is paying off, but…

What can I do differently this time?

The hotel occupies an entire lot, with three storeys the management did not deem fit to illuminate. A flickering red bulb shows ‘BAR’ printed on a board beside the beaded curtains that lead into the establishment. The music is scratchy as it pervades the night, yet this dump is cream of the crop—a steep ten thousand v-naira per night. That’s money I’m choking on debt for…

…but this time there’s no question. That lunatic client has murdered me twice already. I make a full one-eighty when my phone buzzes from my purse.

Oh fuck. It’s from the clinic.

Sandra Kosoko, this is a final reminder regarding Patient Kosoko’s outstanding medical bill of 30,000.00 v-naira over his Nanite Therapy Chamber. Failure to remit will lead to forfeiture of the service by Monday, 3rd of July.

Another beep and it’s the banking AI, reminding me of the chicken-feed excuse of cash left across all my virtual wallets.

I take a deep breath and consider my options. The AI’s reminder was the tipping point that led me into the bar every time. I need this cash. God knows how long Papa will have left without that nano-tech treatment.

And if I died here, then he’d find out about this hustle and lose the chamber. That’s even worse. I’m leaving.

I bump into someone as I turn into the parking lot. Bloody Christ—it’s as though this bastard is omnipresent. I clutch my purse tighter as I try to sidestep him, but his hands aren’t the only big things about him.

“Sandra, yeah?” The bar’s lights paint the smile on his dark face. “I’m your appointment.”

“I don’t know what you’re talking about,” I say quickly, still trying to brush past him. His hands wrap around my arm. Heavy. His full height looms over me, an entire foot taller.

“I didn’t pay Moyo all that cash just for this,” his face leans closer, blotting the moonless sky behind. All pretext of a smile had vanished. “Follow me inside.”

Electricity ripples across my body…

For an instant I see the bewilderment register on his face—and I assume mine too—before he grinds his teeth in rage. “How’d you do that?”

I jerk my arm from his grip and run for it. My fingers fiddle nervously in my purse as I try to get my phone, but I have nobody to call. Even the cops have no emergency lines in this corner of Lagos. They’d just wave my corpse past without even sparing a glance. I swear I could probably imagine the looks on their faces when they saw my bashed-in skull: “Just another dead olosho. These ritual murders don’t seem to be coming to any end soon. You think her parents knew she was playing hook-up before she got done in?”

Then the client’s full weight crashes into me, emptying my lungs as I smash onto the asphalt. His breath is hot and reeks faintly of weed. My heart is pounding in my head, the pressure threatening to blow my eyes out their sockets.

“What are you? Why isn’t my juju working?”

‘Cause mine’s stronger and third time’s the charm?

“Or did that stupid bitch Moyo tip you off, eh? After all the cash she took from me!”

Terror gives way to rage. That bitch set me up with a ritualist?

He brandishes a padlock from his suit. A friggin’ padlock! What kind of a lunatic goes around wielding such monstrosities anyway? Was this what he’d knocked me out with in our first go around?

A stray torchlight beam falls on us. One of the night patrol. I struggle to breathe, to call out—

The patrol-man drops like a ragdoll, but it’s all the distraction I need to wedge my tongue between my teeth, right over the big veins, and muster the courage to jump even further backwards. It’s a few years off my future, but it’s either this, or nothing at all.

I squeeze out a grin too while I’m at it. I’m nobody’s sacrifice.

I swing my head onto the asphalt.

Each time, reality condenses into my frontal cortex with a sudden burst that nearly fries out all my nerve endings. I choke on the last few words as Moyo sizes me up from beneath her umbrella lashes.

“Haven’t seen you around in a while. Thought your father disapproved of girls like us.”

“He needs Nanite therapy,” I wheeze. “Shit is expensive, and I’m barely keeping our place together with all these agbero syndicates shaking us down for cash weekly.”

Moyo’s flat is in one of the less shitty areas, even though these days much of everything has fallen into ruin. Anyone can tell her ‘job’ pays well, too. After all, these penthouse shacks don’t come free.

“…squeeze you in only if you’re up for it. Sandra?”

“Huh? Yes, yes.” There’s no railing between her corridor and the twenty-foot drop behind, and the height is messing with my head. Moyo’s nails are painted an electric pink that disorients me even further.

“You good? ’Cause I might have a spot or two left. Depends…” She swipes through her phone as I blink the pinkness of her nails from my eyes. “Big cash or small cash?”

She stops swiping contacts, picks one, and that’s when I catch a glimpse of a painfully familiar face. Same client? Same ending? Half the money? Unbelievable! Moyo, you piece of…

“Sandra? I don’t have all evening babe. You know I’ll have to get you all dolled up. Especially with a wig. Jesus, have you always been this grey?”

Her fingers are tapping impatiently on her screen. My heartbeat starts drumming against my ears as a plan forms. The very audacity chills me to my bones. A generator sputters to life a few floors below, as if in agreement.

“Y-yeah. We good?” I outstretch my clammy hand and I wonder whether Moyo’s reluctance means she’s seen through me. She half rolls her eyes, passes her phone to her other hand and takes my hand in hers.

“Now I’ll just need a picture for your client—”

Too late. I’ve pulled, and with my leg wedged just right she stumbles. One step. Two. A desperate flail of her arms…

I reach out and grab her phone as she falls over, screams swallowed by the wailing generator.

For a second I wonder whether her guts will paint the sidewalk pink too.

But it’s just a second. Long enough for Moyo’s banking AI’s notification to slide over her Photoshop-enhanced wallpaper.

So the client did pay her. And if I keep Moyo’s screen unlocked long enough to make one big transfer, Papa’s payments are a problem solved, and with change to spare.

My eyes travel upward, to the blackening sky and the husks of apartments left on this side of town. A lock of grey hair falls from my head as a draught blows by, and I think of the client and his padlock, and whichever unlucky girl will cross his path tonight instead of me.

Moyo’s phone suddenly feels too heavy in my hand.

Thanks for reading - but we’d love feedback! Let us know what you think of Cuffs, Padlocks, and a Splattering of Nail Polish on Facebook.