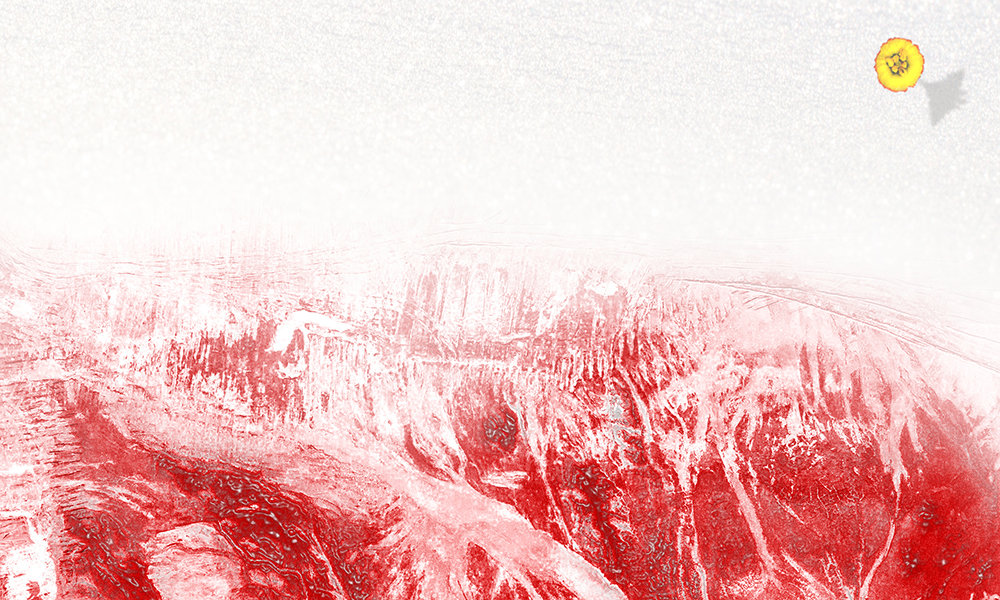 randpa’s house groans as it melts.

Been ten days since we iced it. The dragablocks that make up its walls are turning pink from the blood leaking out—the only color for miles—and I can smell the rotting meat from here. I guess we left it a little too long, but ice is getting expensive. They say they have to make it now, in these huge machines in Kuhlsk. They send it by train.

If Dad would let me get a job—maybe even move to Kohlsk like my friend Tri, work in the Greenhouse District and learn how to grow food—I could send money back and get the hell out of here. If—

…whatever. Probably best not to think about it. Maybe someday I’ll have a life that doesn’t involve hauling ice. Until then…

I hook the next ice block and pull, but the goddamn iceman stacked them crooked. Halfway out, it catches against the corner of the freezer and damn near pulls my arm out of its socket.

It’s the size of a mattress and heavy as hell. Too big for one guy to move safely. But Dad’s up at the house, trying to keep it cool until night crawls its way across the hill. So I’m in the barn alone with an icebox the size of a fucking airplane, a sledge with two broken slats, and an icehook made from an old curtain rod.

I slap my hands against my legs to warm them.

Something in my back wrenches too far to the side, but the block loosens its grip. The thing almost takes my leg off when it hits the sledge, but, mercifully, it misses me and doesn’t break except a chip or two.

Ever since the thaw, those are his favorite kinds of words: fast, faster, now.

he thaw started five years ago, two days after grandma died and one day after we burned her at the top of the hill. I was twelve. Felt like the whole world died with her.

At first it was just strange, so much sun. Little beads of water everywhere. But then it got worse and everything became about saving what we had.

I used to lay in bed, warm with grandma’s tea, and listen to the ice sheets nudge and root into the ground. A slow grind—not the panicky crackling the house makes now, like its dragablocks remember what it’s like to run free across the plateau and are trying to come back to life.

It’s weird when I think about it, but I guess it made sense at the time. Hardly any trees; ground too frozen to dig out rock easily. So we hunted the draga. Pressed them into molds before the cold crept into them. Fat and fur kept the dragablocks frozen inside even when our house got cozy warm.

The whole town’s built like that. Little clusters of buildings, grey-furred, white-capped. Everything the same, forever.

ven with the pulleys, the sledge about kills me getting it up the yard.

Grandpa and Mom are on the roof, faces masked against the smell, and pulling bloody dragablocks to the ground with soft curses. Dad just waits for me, face shining with sweat. “We lost the storeroom,” he mutters, yanking the hook from my hand and pointing it at an oozing pile of blocks. “Goddamn sun better get to setting.”

This close, the smell of rot is overwhelming.

ever.” Dad’s face had gone red. He’d twisted toward me, hand half-raised.

I’d just turned fifteen, and for the first time in my life wondered if he might hit me. I watched that hand for a moment and shut my mouth.

The question seemed obvious to me: “When do you think we’ll have to leave?” The stink of thawed draga hovered over roads muddy with bloody runoff. Part of the slumping municipal center had collapsed the week before. Buried the mayor for half a day. Being trapped like that was the worst thing I could imagine.

But Dad just didn’t see it. To him, the thaw was just a temporary obstacle. “Gotta stick it out,” he always said.

May as well tell a drowning man, don’t be hasty, just see what happens.

I thought of the mayor and shuddered. Everyone my age, we could already see what happens.

help get the ice against the walls and tie it down. But even the blocks we’re saving droop. Dad keeps crying. I pretend not to notice. It’s common now, and I guess I don’t know how to respond.

“Nah,” I say. All I can think about is the draga—bodies now, instead of blocks. I don’t know if I can sleep surrounded by that. “Going for a walk.”

He grunts, glances at the sunset. “Don’t be long.”

I turn my back to the buildings, and for the first time in weeks hike up the hill that runs along the east side of town like a barrow. The air up there comes clean across miles of unbroken lowlands. I jog a little, I’m so excited thinking about it.

It’s a bit of a scramble. I need the icehook to climb the trickier parts.

When I reach the top, back and arms burning with the effort, I find more than fresh air.

find bits of color bursting through shadows in the snow. Tangles of lichen, red and blue and orange, coat every outcropping like hoarfrost from here to the horizon. More color than I’ve ever seen in a world of snow and sleeting skies and the blood-froth of draga culls. Green shoots uncurl, tentative and fragile, and in them I see the stirring of things only read about, or dreamed: wildflowers, forests, crops.

All I can do is sit and stare and maybe cry a little at how beautiful it all is.

jump up. Shit. Lost track of time. After dark it’s killing cold, every kid knows that.

Everything I’ve ever learned tells me to run. I can practically hear my dad: fast! faster! But I take a deep breath and manage to get calm, there, alone for the first time in the dark.

Never knew there’s so many stars.

A new smell whips across the hill from the cracking ice plains.

The town behind me sags and stinks, no matter how much ice we throw at it. But out there, something grows.

I breathe deep and let it fill me.

Thanks for reading - but we’d love feedback! Let us know what you think of “What Comes After Winter” on Facebook.